How do I get discharged from bankruptcy?

In most bankruptcy cases, you will be granted an automatic discharge from bankruptcy nine months after the date your bankruptcy starts, provided that the required duties have been successfully completed.

An automatic discharge means that your Licensed Insolvency Trustee will produce an official legal document called a “Certificate of Discharge” which will state that you filed bankruptcy and that you are now officially released of any obligation to repay the debts dealt with (written-off) during the bankruptcy.

For further clarification on how surplus income impacts the bankruptcy term, please refer to the following diagram: 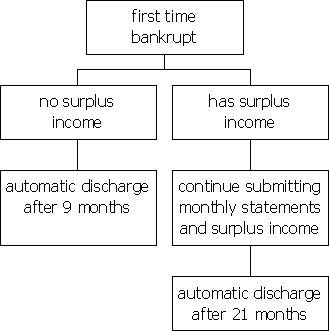 Whether it takes 9 months, 21 months or otherwise to receive your discharge from bankruptcy, it’s important to understand the entire process is generally much faster than if you continued to try to repay your debts (with interest) using a self-directed approach.

Most people complete their bankruptcy in 9 months and move forward with no long-term impacts. Read more about “What happens after you file bankruptcy?”.